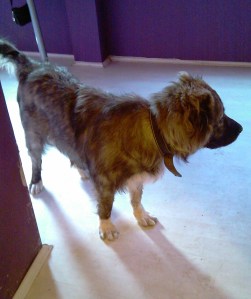 You may know by now that the tall person has a routine in the morning. It begins with me waking him up with several short, sharp, alarm barks. I decided early on that alarm clocks are very annoying so I made our one redundant and took over its job. Ruthless? Yes, but I believe in waking up the tall person in a ‘natural’ way, to the sounds of nature (me), which is much more holistic and environmentally friendly than a buzzing alarm clock. The tall person partially agreed but did ask if I could imitate the soft gentle lapping of waves on a desert island seashore. I tried to but it still sounded like barking.

Anyway, after the tall person opens the back door and lets me out he goes to the kitchen to make a cup of strong black coffee. By the time I return, he is beginning to look more like the tall person and less like a comatose person.

The tall person told me that he has performed his coffee ritual every morning for as long as he can remember. He said that coffee is one of the greatest discoveries of all time, right up there with electricity (to heat water for coffee) and fire (to heat coffee when there is no electricity).

He went to the market yesterday to buy more coffee. He never likes to leave it until his coffee supply is “dangerously low”. By this he means he has about a week’s worth left. 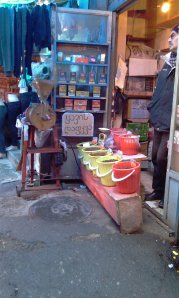 There are several coffee sellers in the big indoor market and the tall person found a new one. You can see from the picture that the man who sells coffee has colorful buckets for the coffee beans and a very fancy grinder.

The tall person likes Arabica beans from Ethiopia. He told me that one of his treasured memories is participating in a coffee ceremony in a remote village in the highlands of Ethiopia in Africa. He said he sometimes thinks of that when he sips his morning coffee.

He bought his coffee and then walked with De to one of the big outdoor markets to buy vegetables. It was very cold yesterday and as it had been snowing recently the market was very muddy.

De does not allow the tall person to talk in the markets because she thinks that the market people will charge more because he is a foreigner so he carries the bags and takes photographs and waits patiently. 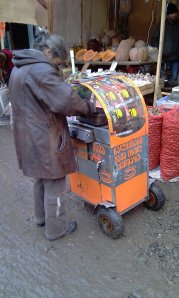 The tall person told me that it was very cold in the market and he had forgotten his gloves and as he was holding the bags he could not put his hands in his pockets to warm them.

Poor cold tall person. Anyway, he said that suddenly he spotted a lady who sells coffee to go. She had an impressive mobile coffee shop where she made steaming hot Turkish coffee.

Wow! That would warm the tall person up! Unfortunately, he couldn’t put his bags down because the ground was too muddy and De was nowhere to be seen.

Poor cold tall person. You should have found the lady who sells plastic bags and lemons and bought some bags to put on the ground so your bags would not get muddy and you could then have drunk a steaming hot cup of Turkish coffee.

Hmm, I need to give you some lessons on lateral thinking tall person!

My great blogging friend Just Ramblin’ Pier is a very talented photographer and her posts are always enriched with beautiful photos that perfectly capture moments in time that stay with you long after you have read her blog.

I visit her blog every day and this morning I read her latest post called ‘How do you share your moments?’ It talks about how moments are photographed by many creative and talented bloggers and woven into stories that are then shared with the world.

To acknowledge this photographic creativity Just Ramblin’ has designed the Creative Capture Blogging Award, an award for bloggers that “put their creative eye behind the lens and capture moments that are shared with the world.”

In her post, Just Ramblin’ lists the first recipients of this award and I was thrilled to see Bassasblog in the list.

Thank you very much Just Ramblin’. The tall person is my camera person and I know it can be quite challenging for him to take photos with one hand whilst holding on to my leash with the other. Tall person says “Thank you!”

They are all well worth a visit!