On my walk through the neighborhood this morning I saw this.

I pointed it out to the tall person and asked him why this tree had legs. He smiled and told me that it did seem unusual.

I suggested to the tall person that perhaps the tree had been unhappy living in a forest and decided to grow legs so that it could walk to a better place.

The tall person agreed and said that sometimes it is difficult to see the wood for the trees and it becomes necessary to remove yourself from a situation.

I didn’t understand that and asked him why the tree decided to come and live here by the side of a road in a city.

The tall person smiled and said that all journeys finish somewhere.

A number of our blogging friends were concerned about the empty chair yesterday (see post) so we went to see if the “lady who sells little things near an artificial beach” had returned to her shop and were relieved to find her sitting comfortably in her box chair. 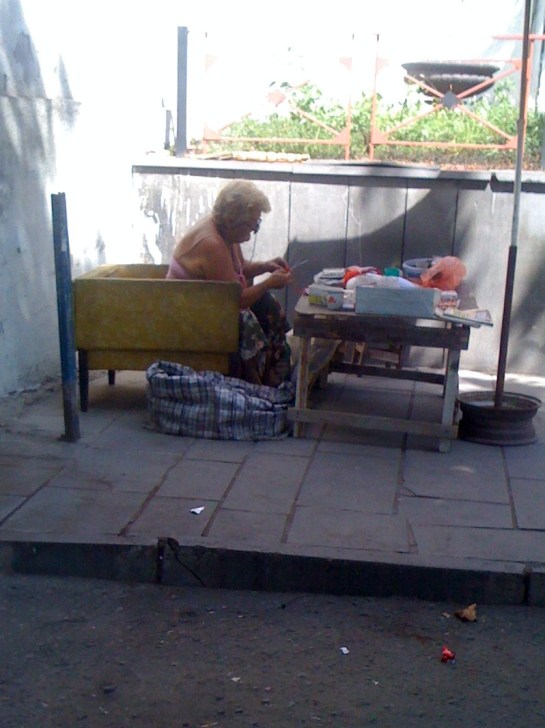 I also discovered that she has legs.

I looked at the tall person but before I could say anything he smiled and said that the mystery is now fully solved. I was about to say “but” but he said that if she didn’t have a bottom she would find it very difficult to sit in her chair.

Hmm, the tall person knows me too well. Satisfied that we had got to the bottom of that mystery we continued our walk through the neighborhood.

I have some exciting news! Tall person has launched a new blog to share his experiences about life in the Republic of Georgia. Having lived here for several years he wants to show the best of the best of this wonderful country and with the help of De and Mari his new blog will take you on a guided tour of its unique culture, rich history, amazing food and wines, colorful markets and natural wonders.

Walk with him in the snow covered Caucasus mountains and lush forests. Tour the towns and cities and countryside and meet the Georgian people, renowned for their hospitality and love of life. Learn how to cook Georgian food. Visit centuries old churches filled with exquisite icons and murals. Learn about traditional crafts and customs. See the best of the best of Georgia.

Called Georgia About, the new blog will bring beautiful Georgia to you! http://georgiaabout.wordpress.com/ 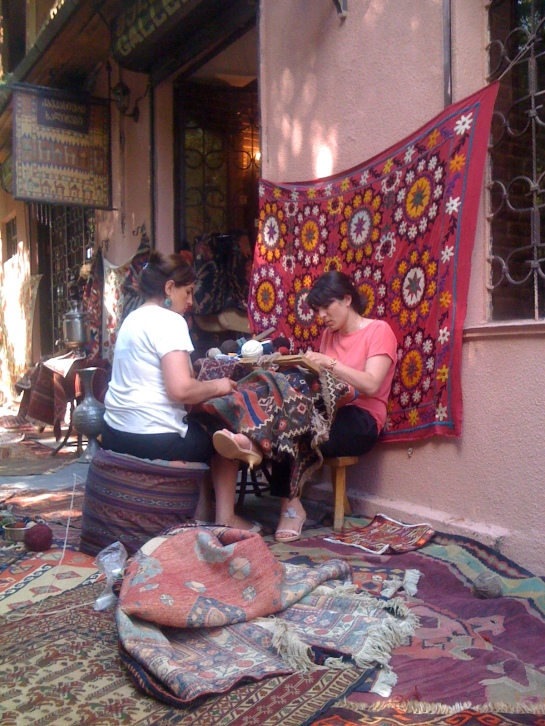 Visit Georgia About and see the best of the best of Georgia: http://georgiaabout.wordpress.com/

Good luck with your new blog tall person. I see you have found something thinner than you!

On my walk today I found this street art……………in the middle of the street!

I like the way the street artist has blended natural and synthetic materials and wrapped them in a yellow ribbon. The inclusion of a tire is inspirational and is clearly a comment on society’s dependence upon the motor vehicle.

I admire the determination of the artist. It must have taken some effort to dig that hole! 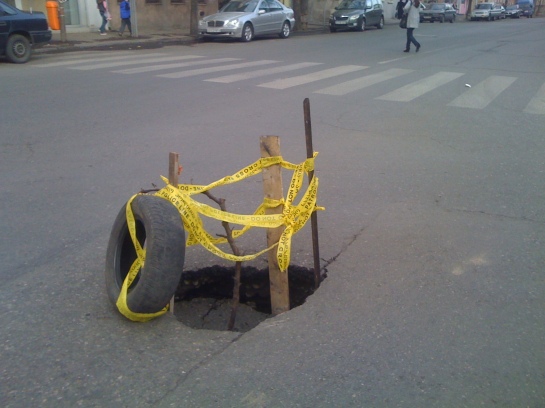 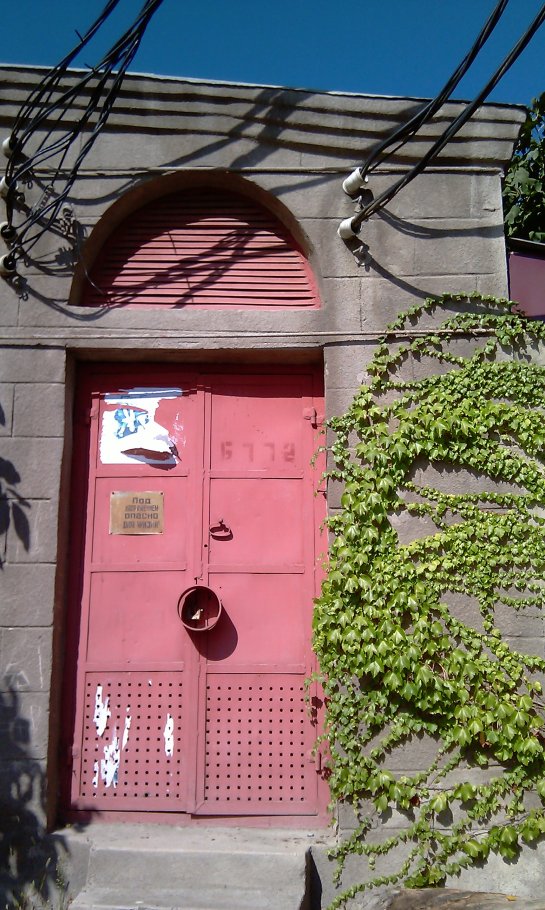 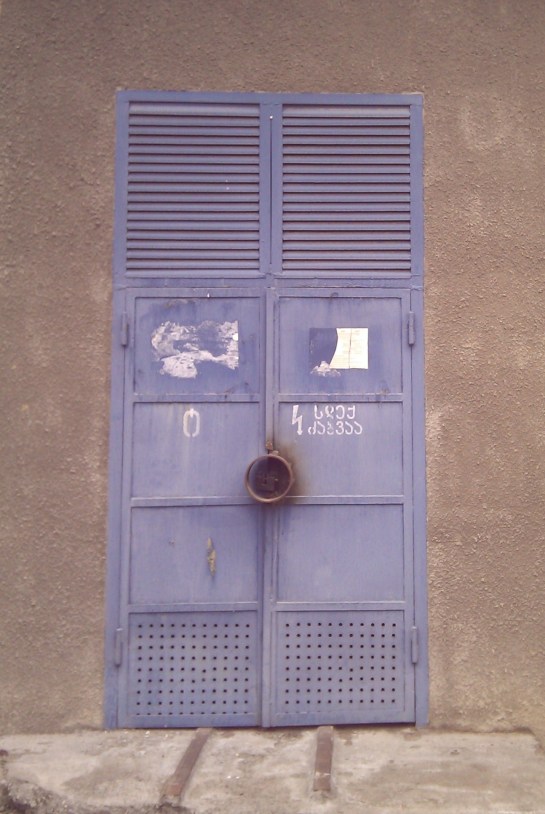 I pointed out the color difference to the tall person and he said he preferred the blue colored door. Hmm, I prefer the pink colored door.

I asked the tall person why is it that boys usually prefer blue and girls pink? Tall person said that is exactly what two neuroscientists working at Newcastle University in Great Britain set out to answer. Doctors Anya Hurlbert and Yazhu Ling created an experiment concerning color preferences among men and women.

The scientists discovered that women do prefer colors toward the red end of the spectrum, where shades like pinks and lilacs are found. They suggested that the preference comes from the role assigned to ancient women. Men generally hunted while the women foraged for fruits, vegetables and other plants.

Women became attuned to the reds of ripe berries and other fruits that would win them points among the others in her band. As such, women came to focus on the color red (and the rewards associated with it) in order to make their search easier.

Men became attuned to blue because it signified “good weather”for hunting and a “good water source”.

Hmm, very interesting tall person. We have a beautiful blue sky today. Does that mean you will go hunting for food and De will be foraging for berries?

Tall person took these photos when he was working in Ethiopia. 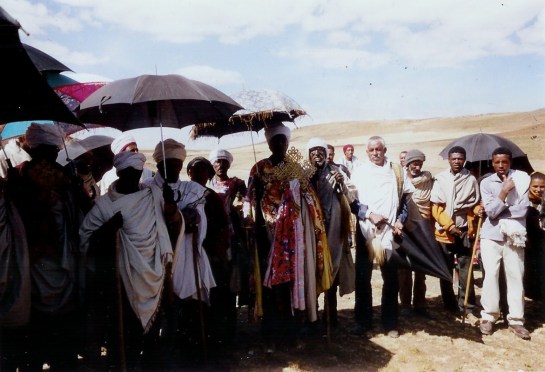 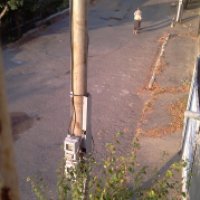 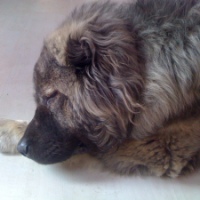 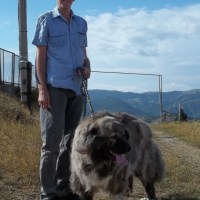