Although I always say that we live on a hillside the tall person told me today that we actually live on the lower slopes of one of the mountains that surround Tbilisi. He said that it feels like a hill because we have never really climbed high enough to know it is a mountain. So today, the tall person decided that we would climb the mountain. I asked him if we might need oxygen and he laughed and said that he might!

We set off on our usual walk towards the forest. The tall person said that we usually only go to the lower part of the forest but today we will follow it to the top of the mountain. On the way I met the Caucasian Shepherd that usually just pokes his nose out and watches me pass by his veranda but today he was grumpy and barked at me. I ignored him. I would need all my energy for the climb up the mountain.

We got to the forest and started to follow the track. I know this track quite well so everything was familiar for a while. After a while we stopped for a rest and the tall person went off to take some photographs. I waited with De.

The tall person had only been gone for a minute when De suddenly starting shouting for him. She was shaking but I did not know why. The tall person rushed back and De explained that she had just seen a huge snake slither across the track and disappear into the undergrowth. She described it as five feet long and brown coloured. The tall person kept snakes as pets when he was younger so he is not afraid of them but De does not like them at all and it took her a while to stop shaking. The tall person explained that snakes are usually scared of people and will avoid them if they hear them coming. He said that you should stamp on the ground if you see one and it will feel the vibrations and slither away. Hmm, I must remember to practice stamping. The tall person said that he was disappointed that he didn’t see it. Well Mr. Snake Charmer I didn’t see it and I’m not disappointed!

After the snake encounter we continued to climb up through the forest and I trod heavily to warn off any snakes. The views were spectacular.

We followed the track as it wound its way around and up the mountain and after a very long while we emerged onto a flat place, which the tall person announced was the top. I must admit I was a little disappointed – I had expected that there would be snow and we would need climbing gear and Sherpas to reach the peak!

Anyway, the tall person said that he didn’t think anyone would mind if I named the mountain. Wow, I have never named a mountain before! I must admit I was very tempted to call it Bassa’s Mountain but then I remembered the encounter that De had with the snake so I decided to call it Snake Mountain so that we would always remember to be careful when we go there.

It was getting dark as we walked back down the mountain and the moon was out when we arrived home. The tall person told me that he took this picture of a sad cloud. I must admit it does look sad. Perhaps it will cry and make rain. 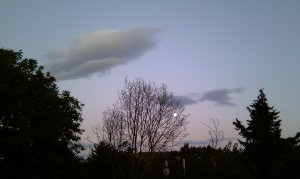 Anyway, I had an amazing day today and think I will go to bed early and dream of other mountains to climb. The tall person told me that Mount Everest is quite tall. Hmm, I might try that one day.