It rained in Tbilisi today and I was out in the thick of it playing football with the tall person. I prefer playing football in the rain – it’s easier to do sliding tackles. The tall person will confirm this as I ‘dropped’ him several times. He said it was a foul and starting quoting Football Association rules. Hmm, show me how that applies to a dog tall person. Play on!

I must admit that I do have an unfair advantage – I’m much faster than him and he can’t catch the ball in his mouth. So much for human evolution!

Anyway, we had a lot of fun. I let the tall person score a few goals to keep him interested but at the end he suffered a crushing defeat. He took it well and was clearly oblivious to the utter humiliation he should have been feeling. I am only 9 months old after all and a girl.

We both got very wet and muddy and when we got home De told me that I was smelly! Poor De, she doesn’t understand the realities of football. It’s a physical game De and yes we do sweat!

5 thoughts on “The beautiful game” 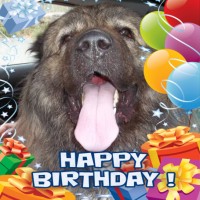